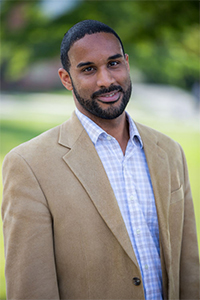 Drew G. I. Hart is a professor in theology, an author, and an activist with ten years of pastoral experience. His undergraduate work was in biblical studies at Messiah College, he received his Masters of Divinity degree with an urban concentration at Biblical Seminary, and he earned a PhD in the field of theology and ethics at Lutheran Theological Seminary at Philadelphia. During graduate school he was a part-time professor for several PA seminaries but in the Fall of 2016 he began teaching full-time as an assistant professor in theology at Messiah College.

After his undergraduate studies Drew spent most of his time pastoring and mentoring black and brown youth, working for an inner city after-school program, and working closely with Philadelphia based nonprofits. Today, along with teaching theology, Drew continues to partner with community groups and churches across the country by facilitating anti-racism trainings, seminars, as well as delivering lectures and talks for colleges and conferences.

Regularly speaking across the country Drew brings together his pastoral experience with his academic training to challenge the Church on a variety of topics. He has been particularly invested in writing and speaking about white supremacy/racism and their entanglements with western Christianity, but Drew also speaks and writes about Christian discipleship, western Christendom, Christian history, liberation and oppression, radical peacemaking and nonviolent resistance, urban ministry, social media, etc.

Drew has a Christian Century hosted blog entitled ‘Taking Jesus Seriously’ while also writing occasionally for The Mennonite as well. His own personal site is http://www.drewgihart.com. He regularly sneaks in tweets with the handle @DruHart and can be found on Facebook. He is the author of Trouble I’ve Seen: Changing the Way the Church Views Racism. Drew and his wife Renee have three sons and live in Harrisburg, PA.