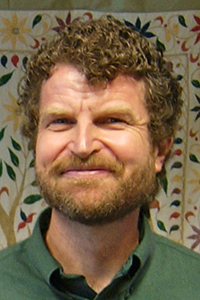 Professor Robin Collins, Ph.D., is Distinguished Professor of Philosophy and Chair of the Department of Philosophy. He specializes in philosophy of science, philosophy of religion, metaphysics, and philosophical theology. He is well-versed in issues relating to science and religion, with graduate-level training in theoretical physics. He has written almost forty substantial articles and book chapters in these areas with some of the leading academic presses, such as Oxford University Press, Cambridge University Press, Blackwell, and Routledge. He has also spoken on issues relating to God and the cosmos at many colleges and universities (including Oxford University, Cambridge University, Yale University, and Stanford University) and has appeared in the popular Christian and secular media – for example, in Christianity Today, Lee Strobel’s Case for the Creator, and Robert Kuhn’s PBS series Closer to the Truth. Professor Collins is widely regarded as the foremost expert on the fine-tuning argument, an argument for the existence of God based on the extraordinarily precise structure that the universe must have for life to exist. He is currently finishing two books on this topic: one that provides a detailed analysis of the evidence for fine-tuning and one that carefully makes the philosophical case from fine-tuning to divine creation. Besides his work on fine-tuning, he has written on the philosophy of quantum mechanics, the relation between the mind and the body, the nature of prayer, atonement, and a variety of other topics in philosophy of science and philosophy of religion.

I became a Christian shortly before going to college at Washington State University. Partly because I was not raised in a Christian home, I had many intellectual questions about the Christian faith. These were partly stirred by my best friend from high school attempting to dissuade me from any faith. In college, I majored in mathematics and physics (completing two degrees in this subject), eventually picking up a third major in philosophy – which I completed on a scholarship in my fifth year. I went into philosophy because I thought it would give me the tools to help sort through my faith, which it did.

Before pursuing a doctorate in philosophy, I went to graduate school in theoretical physics for two years at the University of Texas at Austin (1984-1986). During that time, I felt a strong and persistent sense of calling to do philosophy as a vocation, something that has stayed with me over the years. Because of this, I wrote the newly formed Society of Christian Philosophers concerning whether there were any Christian philosophers at universities on the West Coast. When I eventually received a reply, it was on a letterhead with the imprint “Alvin Plantinga, President, Society of Christian Philosophers, University of Notre Dame.” After a little research, I knew that I wanted to study under Plantinga, who was not only a devout Christian but one of the leading philosophers in the world. I thus went from there to the University of Notre Dame, which was (and still is) both a leading graduate school in philosophy and one that has many Christians on its faculty. The training in philosophy I received at that time further strengthened my faith. I also learned that there was a revival of Christian thought taking place in philosophy departments throughout the country, something that has continued since I graduated. As a leading atheist philosopher, Quentin Smith, has noted, “God is not ‘dead’ in academia; he returned to life in the 1960’s and is now alive and well in his last academic stronghold, philosophy departments.”(Quentin Smith, “The Metaphysics of Naturalism,” Philo, Vo. 4, N. 2, 2001, pp. 196-97)

Since being here at Messiah College, I have particularly pursued questions on the intersection of science and religion, receiving three major external grants for work in the area. The area that I have become most well-known for is the argument for divine creation from the so-called fine-tuning of the universe – that is, the fact that the basic structure of the universe is set just right for life. I am now completing the first of a three volume set of books on the subject, with the first volume concentrating on the physical and cosmological evidence for fine-tuning, the second volume concentrating on the multiverse explanation (which is the leading non-theistic explanation), and the third concentrating on the philosophical and theological issues involved. In the future, I hope to publish a popular book on the subject.

This work has greatly strengthened my faith, especially since the spring of 2010. I not only discovered many cases of how the universe is fine-tuned for life, but also that it is fine-tuned so that we could have technology and can do science. Concerning the latter, if certain aspects of the fundamental physical structure of the universe were slightly different, humans could have existed, but they would have had no means of developing scientific technology; they would have been forever stuck in the Stone Age. For me, this provides compelling evidence for divine providence in the basic structure of the world for both our existence and our science and technology; this means at the most basic level, our science and technology points to the providence of God. My research in this area has also given me a strong sense of how miraculous the structure of the universe and the world around us really is; everyday truly does seem like a miracle to me.

Finally, over the years I have also come to appreciate how God works in circuitous ways. As one example, when I first started studying philosophy at the University of Notre Dame, I had wondered why I spent so many years studying physics and working in physics labs. Since that time, however, my background in physics has become my greatest asset. Because God often works in this way, the providence of God in our lives will not always be obvious, but often can only be seen in hindsight. For students, this implies that unless one feels a specific calling to pursue a certain career, one should use college to develop one’s gifts to the fullest, while being open to how exactly God might use those gifts in the future. As the book of James tells us, do not say, “Today or tomorrow we will go to such and such a town, stay there a year, conduct business, and make money” since “you do not know what tomorrow will bring” (4:13-14). Rather, say “If the Lord wishes, we will live and do this or that” (4:15). I thus encourage my students to be like the faithful servant in the Parable of the Talents and to invest in the development to their reasoning capacities through their study of philosophy or whatever other subject they are pursuing, but at the same time to recognize their need for God’s guidance and providence.