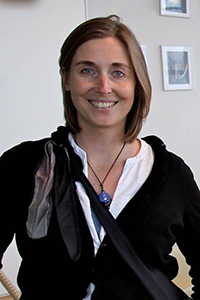 Professor Noble grew up in Santa Clara, CA, in the heart of Silicon Valley. After high school, she attended Westmont College in Santa Barbara, California where she studied Chemistry and also sang with the college concert choir.  In her senior year, she took a break from chemistry to study art, history, and religious studies in Europe – this transformative experience was the beginning of a lifelong love of history, art, and international politics and culture. Professor Noble earned a Ph.D. in Chemistry at the University of Illinois in 2002 and subsequently worked as a Senior Process Engineer for Intel Corporation in Portland, Oregon.  After a few years in industry, Professor Noble moved back into academia and joined the Messiah faculty in 2010.  Dr. Noble enjoys traveling, reading, and the outdoors, but spends most weekends cheering on her two teenagers at various cross-country and soccer events. In addition to teaching chemistry, Dr. Noble has also co-taught the Scandinavia Cross-Cultural course and mentors undergraduate students in her research lab.  She is currently serving the college in an administrative assignment as Assistant Provost and Director of Faculty Development.

Noble, Alison R. “How is the fluorescence spectrum of a pyrene excimer related to its thermodynamic properties?” Laboratory and Instructor’s Guide, The POGIL Project – Physical Chemistry Laboratory, submitted for publication, 2017.