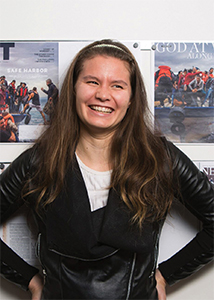 When she joined the staff as the director of The Pulse when it launched in 2011, Morgan Lee ’12 could only dream it would become Messiah’s student-run media hub. What started as a radio station and yearbook has expanded to include a monthly magazine, website and thriving social media presence.

“I’m excited when I see photos of student events,” said Lee, who follows The Pulse on Facebook. “One of the best gifts I think The Pulse has given is bringing photographers to student events. It reinforces a sense of shared excitement and community.”

After graduation, Lee was accepted into a nine-month leadership program, the Coro Fellows Program of Public Affairs, in New York City. In the city, she completed six internships, working everywhere from offices in commercial real estate to the teacher’s union. Eventually, Lee joined an online news company based in the city.

During her first reporting stint, Lee had coffee with Katelyn Beaty, a fellow Christian college alum who worked as the print managing editor of Christianity Today magazine. Several months after their meeting, Beaty invited Lee to apply for a residency with the Chicago publication.

Now an editor for the magazine, Lee writes articles about global issues for print and Web.

“As a reporter, I’m glad that I have a background in politics,” she said. “It’s good to have a global understanding, since that’s one-third to one-half of the things I write about.”

Lee says her experience at Messiah pushed her to learn more about social justice and gave her a broader awareness of human rights. “It also made my faith more resilient,” she said. “Growing up in a conservative household, I had a particular idea of what Christianity and faith was like. My time at Messiah made me more open to questioning things.”