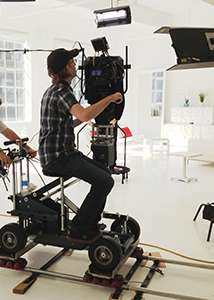 “When I was around 10 years old, I checked out The Sting (1973) from the library. My life has never been the same,” says James Knightly (’09). The Sting opened his eyes to the enjoyment of watching movies but, Knightly says, “It wasn’t until my senior year in high school—when I started making skate videos with friends—that I fell for being behind the camera.”
Knightly graduated from Messiah as a communication major with a film concentration in 2009. Knowing he wanted to pursue film, he had looked for a Christian college that would allow his faith to grow and one with a strong film program. Due to the opportunity to go to Messiah’s Philadelphia Campus, he only applied to Messiah. While at Messiah, he spent time skateboarding around campus, working at the library, making movies with friends, and studying in Philly. “Living at the Philly Campus (R.I.P.) was one of most pivotal experiences in my college years. Spending time in a major city, building deep friendships on a smaller campus, and being able to take film classes at Temple was an irreplaceable part of my education,” says Knightly.

Following graduation, Knightly moved back to Philadelphia to start building the connections he needed to get his foot in the film industry door. After spending 8 months working at a documentary studio for $5 an hour, his boss informed him that he no longer had any money left. Left with bills to pay, he considered becoming a dog trainer at Petco or starting his own company. “I didn't want a 9-5, so I started James Knightly Films.”

James Knightly Films primarily creates wedding films, but Knightly also offers cinematography and editing services. He shot his first wedding in 2011 and loved it. “Working on my feet, capturing real moments between people, and feeling the energy all around me are the things I love about this job,” he says. “I thrive on blending into the background and stealthily grabbing my shot.” Currently, the company is also finishing a promo video for UrbanPromise International, starting an editing job for Johnson & Johnson and beginning preproduction on a music video. Knightly’s favorite type of projects involve narrative film, “Harnessing the emotional power of lighting, lens selection, camera movement, and composition is what excites me about being a filmmaker.”

As a filmmaker, his proudest moment arrived when he found out that Paper Turtle (2010) won awards at film festivals. The short drama depicts the growing friendship between a dying boy and a ghost that only he can see. Knightly worked on the film with Messiah alumni Jonathan Stutzman and Christian Imbesi ,and it received the Best Short at the Columbia River George International Film Festival (2010) and the Rising Star Award at the Canada International Film Festival (2011).
For aspiring filmmakers, Knightly has one piece of advice. “Work hard. Don't assume that your classes are going to prepare you for life post-college. I put in a lot of time studying on my own outside of classes. It's about self-directed learning I guess—that's a habit that continues in my life now.”

James Knightly still resides in Germantown, Philadelphia, with his wife, Laura, and hopes to continue to learn, make movies, and pay the bills.