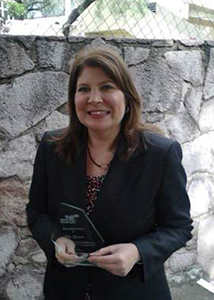 At the Homecoming Reunion Celebration Banquet on Oct.18, communication alum Kim Lawton (’85) humbly accepted the Distinguished Alumna Achievement Award. Each year, the office of alumni relations salutes alumni who have made exceptional contributions to society or Messiah College. In particular, the Distinguished Alumna Achievement Award recognizes a lifetime of vocational accomplishment that reflects the mission of the college.

Currently working in Washington, D.C., Lawton serves as managing editor and correspondent for PBS’ Religion and Ethics Newsweekly, a newsmagazine format show that she helped to start in 1997. “We recognized that there was a need in mainstream media for coverage of religion that was intelligent,” says Lawton. The program, which reaches 275 stations, highlights the importance of religion in politics and people’s lives, without advocating a particular religion.

As a first-year student at Messiah, Lawton knew she wanted to travel, but she was puzzled about choosing a major. Recognizing that she enjoyed talking, her father suggested that she choose communication. At first, Lawton took foundational communication courses. Then, in the fall of her junior year, she took part in the American Studies Program, where she spent a semester in Washington, D.C., working at a radio news network. It was then that Kim developed a passion for journalism.
After being offered an entry-level position at a radio network in Philadelphia, Lawton made the decision not to return to Messiah for her final semester. Rather, she completed her degree through correspondence courses and managed to kick-start her career at the same time.
When asked to describe a day at work, Lawton responded, “There is no typical day.” She fulfills both internal and correspondent roles for Religion and Ethics Newsweekly. Kim relayed that because the show covers news, she has to be aware of what’s happening. “I cover wide array of topics because religion touches on everything from politics and pop culture to foreign affairs and Supreme Court cases.” As a correspondent, she has traveled to 40 countries, including Turkey, Israel, Italy and several African countries.

Lawton’s favorite part of the job is meeting people where they are, discussing their concerns and passions, and telling their stories. “I love seeing first hand religion in action.,” she shares. “Faith motivates people.”

Lawton recognizes that Messiah’s commitment to integrate faith and learning as well as the enriching opportunities the college offers have prepared her for her current position, adding “Faith is part of who you are, no matter what you do.”
Upon hearing that she had been selected as the winner of this year’s Distinguished Alumna Achievement Award, Lawton exclaimed, “Oh my gosh! I’m getting a lifetime achievement award already. It’s a great honor!” She feels humbled to receive the award and admits, “I hope I have a lot more to accomplish!”

Lawton urges students, “Don’t be afraid, but be realistic. The world of communication is changing rapidly, and we don’t know where it is going to end up. It’s exciting, but troubling at the same time.” She advocates connecting with others to tell their stories and encourages journalists to maintain their standards of excellence.