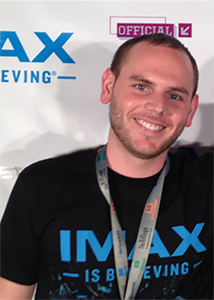 Starting after graduation, Davis moved from provincial Grantham, Pa., to New York City to work for global PR firm Gavin Anderson & Company. A few years later, a former colleague recommended Davis for a job which specialized in streaming video at Piksel, Inc. “The position came with an interesting catch, though,” Davis explains. “It was based in Prague, Czech Republic.” This tough decision to leave the comforts of family and friends resulted in an opportunity to live, work and travel in Europe for the next two years.

Davis says that just as he began to consider moving back to the States, the same former colleague recommended him for a position at IMAX Corporation. Davis then moved back to New York City and came on board with IMAX as Executive Director of Corporate Communications. Davis now orchestrates much of IMAX’s global communication strategy for more than 1000 theaters, including drafting announcements, media relations activities and internal communications.

Davis notes, “I have always been a huge fan of movies and technology, so landing a job at IMAX was a dream come true.” He says working publicity campaigns for popular movies like Star Wars: The Force Awakens, The James Bond films and The Avengers is his favorite part of this job.

Davis thanks his Messiah experience for playing a role in discovering his strengths and character as a person. He explains that the lessons retained in classes like Crisis Communication and Communication Theory have helped him deal with the politics of a corporation and how to work in the PR industry while retaining integrity.

Davis offers two job-hunting tips for to differentiate “between having a job and building a career.” First, he recommends taking risks and pursuing a personally satisfying career to avoid being stuck in an unsatisfactory work environment. Second, Davis underscores that it’s never too late to make a course correction. He says, “There is a difference between being content with what you have and being too lazy to get what you want.”