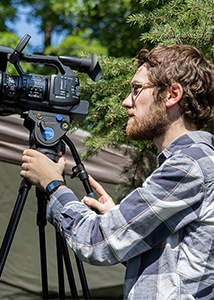 “No longer do you need to work for a major studio in order to make money in the film industry or have the resources to bring your artistic vision to life.” When Matthew Elton graduated with a degree in Film and Media Arts in Dec. 2012, he headed off to upstate New York to prove that philosophy true.

After falling in love with filmmaking’s juxtaposition of art and technology, Elton combined his film experience with his entrepreneurial ambitions and started his own video production company. Today, Plasma Productions provides
services such as commercials, event videos and music videos to both organizations and individuals. “My company offers commercial and documentary production with a specialty in multi-camera production, live video mixing and webcasting/live-streaming services,” says Elton.

In a field as dynamic as film, every day offers a new experience. “At any given moment of day or night, I may be shooting video or doing video editing, lighting work, script writing, script editing, audio recording, audio editing, still photography, graphic design, web design, marketing or animation.”

His job requires flexible hours and the willingness to travel up and down the East Coast. Currently, Plasma Productions services New York, Pennsylvania, Connecticut, New Jersey, Massachusetts and Vermont, but they hope to begin work in California and Hawaii in the near future. “I would encourage film students at Messiah College to rethink their plans to move to L.A. after graduation, and consider the opportunities right here, especially in areas like central Pennsylvania and upstate New York where there is not a lot of competition in the professional video production market.”

Elton encourages young filmmakers to not only un-focus their lens to look for work in the East, but he also recommends taking advantage of this phase in life. Because of the network he built in college, Elton’s business had clients right out of college. He also suggests taking advantage of the internet to find freelance work and boost marketing. “I think the biggest challenge in the entrepreneurial world is simply the startup costs associated with running a business,” says Elton. Thankfully, his pre-built network, the internet’s easy access and his ability to buy equipment early on launched him into a successful career.

“The more I progress in this industry, the cooler my work becomes,” says Elton. “I not only have more capability to do great work, but more freedom to do artistic work.” Elton’s experiences, network and flexibility have allowed him to successfully bring his dreams to life, and the deep love for film makes his work enjoyable. “At the end of the day, I am making money doing something I love,” says Elton. “Filmmaking challenges you to use both sides of your brain. A good filmmaker understands the technical skills and science of the craft, but also has an artistic vision for what he or she wants to create.”