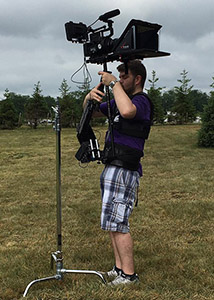 When Rolando Vega graduated in 2013 with a degree in Film and Media Arts, he headed off to Los Angeles for an internship. However, instead of filling his time with glamorous film opportunities as expected, Vega spent his days reading through script submissions for Barnstorm Pictures.

Once his internship ended, Vega expected it to turn into a Los Angeles job, but came up emptyhanded. Eventually, he turned his gaze back east and applied for “less glamorous” opportunities in New Jersey. Initially, Vega hesitated to even apply for video production positions at churches, but now that he’s established himself as the video producer at Princeton Alliance Church, he enjoys the experience.

Working for a church presents the opportunity for both artistic freedom and purposeful work. Vega especially enjoys that his projects specifically draw people closer to Jesus.

During the week, Vega creates original content like promotional videos and inspirational products for use on Sundays. Recently, Vega partnered with the pastor and graphics team to create small group curriculum content. All of these projects allow Vega the space to experiment with creativity and effective communication. On Sundays, Vega’s job primarily entails recording the service, editing the content and uploading it online.

Vega carries his passion for film beyond the sanctuary as well. Vega’s freelancing business, Vega Productions, brings in extra work experience and income to further Vega’s craft. His freelancing projects include short films, music videos and promotional aids for organizations. And, in an effort to encourage other young filmmakers, Vega regularly funds Messiah student films.

According to Vega, college represents the ideal time to grow as a filmmaker. He suggests that students take full advantage of the opportunities for working with others, accessing excellent equipment and networking with with people around them. Vega emphasizes that last point, believing that a strong network remains the best asset a person can have. With drive and the ability to make friends and learn teamwork, purposeful and artistic filmmaking possibilities exist far beyond the reaches of Los Angeles.