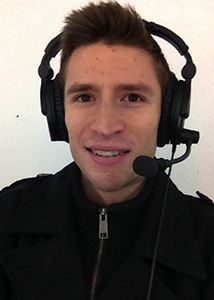 “It takes work and a desire to stand out if you want to land your ideal job, but if you have put the time in during college to gain experiences, that is a good step toward the first job.” Joel Hoover’s passion for a very specific job, sports play-by-play broadcasting, prompted his transition from Messiah all the way to Bemidji, Minnesota. Directly after graduating in 2015 as a Journalism major with a minor in Sport Management, Hoover became the Sports Director and lead Play-By-Play Sportscaster for Paul Bunyan Broadcasting and KBUN Sportsradio in Bemidji.

He describes the process of applying for such a specific position as quite challenging, but with persistence, was able to land this position soon after graduation. “Getting a foot in the door in this field often depends on an employer taking a flyer on you or giving you some type of odd job to begin with. With essentially all of the radio stations I applied to across the country, I did not even get a return phone call showing interest or follow up.”

As Sports Director, Hoover updates the local sports report for multiple stations under Paul Bunyan Broadcasting. He also hosts a daily, two-hour sports talk show. Along with hosting, Hoover broadcasts many local sporting events for the Bemidji High School “Lumberjacks”, and occasionally conducts on-air music. Hoover had the opportunity to travel to Minnesota’s nationally renowned State hockey tournament with Bemidji’s boys hockey team in 2016 and the State boys soccer tournament this past fall.

Hoover faces a few challenges and surprises that come along with this specific type of position. “Our broadcasting company made the decision to launch an FM sports talk station just four months after my arrival, which led to the launch of our sports talk radio show just one month after that. It has been one thing after another added on, which has provided new challenges but new opportunities at each stage.”

In terms of education, Hoover appreciates the one-on-one instruction given to him by Messiah’s professors, as well as practical application in other fields of journalism that rounded his array of experiences. He also praises Messiah’s ability to integrate Christian-based perspective into journalism classes. His professors helped lay a foundation that would allow Hoover to keep faith integrated throughout his work.

Hoover offers these words of wisdom to current students: “Above all, I encourage you to entrust your future to the Lord and commit your ways to Him. You will find your answers and your life’s fullest purpose by making that your greatest pursuit.”