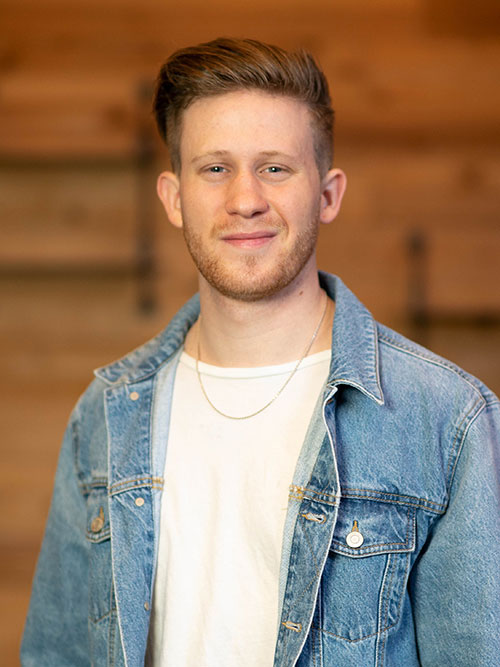 What do sleep-deprived college students and Hunter Hill, film and media arts alum, have in common? Sometimes, they do their best work at 2 a.m.

Hill did not choose this schedule when he accepted the position as a videographer for Timberlake Church in Redmond, Washington. Most people wouldn’t think that working for a church would require such a commitment, but between juggling last-minute schedule changes and a global pandemic, Hill worked 60 hours a week in his first month. “Working in a church environment for a big church is actually pretty difficult because of the amount of flexibility you have to have,” Hill explains.

Five days before the COVID-19 lockdown began in March, he moved to Washington state. Classified as an essential worker, he jumped right in and spent his first month on the job trying to find his rhythm. He would work eight or nine hours, then come home and finish a project late into the night to meet his deadline. Looking back, Hill admits, “It was a little crazy and it took a while to find that balance. The church was trying to find what works and what doesn’t, too, so it was understandable, but it got crazy for a moment.”

The complexity of video production only added to that chaos. Hill recalls that “in a lot of conversations I’ve had, people don’t think about the depths of [video] until you show them what you’re doing and you show them a project file and they are just flabbergasted.” On the outside, shooting and editing a video seems like a simple task, but Hill spends many hours focused on the smallest details.

These details, however, make Timberlake’s online service extremely successful, reaching about 3,000 people a week. The video team bases its strategy on a very specific algorithm. For example, Timberlake does no more than eight minutes of worship because studies have shown that after eight minutes, people tune out. Team members have a set schedule for every aspect of the service, and they rarely deviate from it. This numbers-based formula may seem restrictive, but living in a city just outside of Seattle, Hill says, “It’s a different culture… Time is people’s biggest asset.” This tried-and-true algorithm allows the church to keep viewers engaged by not taking up more time than necessary.

Being able to combine creativity with practicality stands as one of Hill’s favorite parts about being a videographer. He does most of the project management for his team, and with every project, he adopts the mindset of a problem-solver and asks himself: “What is my goal? What problem am I trying to solve as a result of this video?”

Even with the heavy focus on algorithms and analytics, Hill has not forgotten his passion: making people feel things. “The biggest compliment I can get from a video is that someone teared up, cried, just really felt something in it,” Hill reflects. “It’s so powerful what you can do with video.”

This passion will carry Hill into new industries in the future. He hopes one day to expand into brand marketing, as well as work with artists creating music videos. With such varied interests, he has dozens of avenues he could potentially pursue. “There’s not one definite thing where I know that’s how I want to spend my life, but there are multiple things that I enjoy. There’s a lot of possibility,” he says.

No matter where he works or what videos he creates, Hill will always strive to make people feel something. With that as his focus, he can’t go wrong.