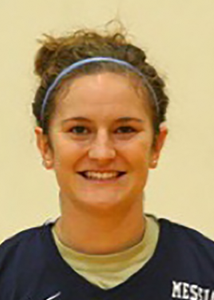 Nicky Hess ’13 Shooting for success
Recent grad Nicky Hess ’13 knows the importance of managing her time. After all, she spent her entire college career carefully balancing her two passions: nursing and basketball. In addition to her role as starting point-guard for the Messiah College women’s basketball team, who made it to the third round of the NCAA tournament this season, Hess managed a full course load as a nursing student—complete with clinical practice, site visits and time-intensive labs. Beyond basketball and nursing, Hess also made sure to enjoy the college experience, too, spending a lot of time with friends on campus. “Even though I had a lot going on with nursing and basketball, I wanted to have friends outside of basketball and enjoy the campus experience,” reflected Hess, “so I had to balance the three.

Soon Hess will carry those time management skills over to her professional career as an emergency room nurse at Harrisburg’s Pinnacle Health Hospital, where she’ll need to quickly adapt to emergency situations and respond to a variety of patient needs.

Thankfully, she is well prepared.

After an initial visit to campus to learn about the basketball program—a sport she’s been playing since first grade—Hess realized that the combined benefits of a great nursing program and the chance to play college basketball was all she needed to commit to Messiah.

Since then, she has never looked back. Though she definitely faced challenges balancing the demanding practice and game schedule of basketball with the rigorous academic work of the nursing program, Hess never wanted to quit.

“There were times where I needed to meet in the middle and couldn’t have the highest expectations for both at the same time,” said Hess. “But I chose to do this; nobody forced me. I really enjoyed nursing and basketball, so I wasn’t going to consider any other options unless I really had to.” Hess’ academic accomplishments were recently recognized at the Central Penn Parent Healthcare Heroes Awards held April 2013. Hess, who was nominated by clinical adjunct nursing professor Jeff Stroup, received the 2013 Future of Health-care Award. The award is presented to a young adult who demonstrates a dedication to health care, professional behavior and service to local communities.

Hess, who credits her family for their support and encouragement, has known from a young age that she wanted to be a nurse. “I wanted to be in a profession where I was helping people,” says Hess, “and I enjoy the sciences and studying the body, so I thought it [nursing] was the perfect combination.” Eventually Hess wants to serve as a medical missionary, but for now she will continue gaining valuable nursing skills in Central Pennsylvania, striving to comfort and heal each patient she treats.