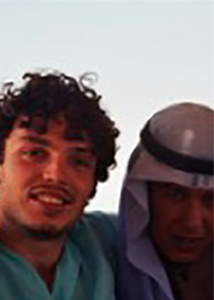 David Ben-Avraham ’08 Building faith among 'peoples of the earth'
While living in Israel, David Ben-Avraham (left) backpacked with friends along the Red Sea coast in Egypt, where he spend a few days with a nomadic Bedouin tribe. During his visit, he befriended a young Bedouin man over hot tea and a pipe.

David Ben-Avraham ’08 says he has, at times, felt he belonged “neither here nor there,” as a Jew who keeps the rabbinical laws and accepts Jesus as the Messiah. “You’re kind of an outcast of both parties,” says the dual citizen who grew up in Israel. Over time, Ben-Avraham , who is now a nursing graduate student , says he has come to understand that his “minute minority” status offers unique opportunities to bring people together. His family — looking for a peaceful setting in nature — moved to Colorado when he was 16, swapping houses with a family who wanted to live in Israel. Two years later, the then-18-year-old Ben-Avraham returned alone to Israel to fulfill the military-service requirements mandated for all qualified Israeli citizens. “The hardest part was dealing with murder, essentially,” he says of his three-year stint as an army medic who treated suicide-bombing victims. But, the experience also opened a door. “I had worked since [age] 14 in all kinds of jobs, and this was the first I could see myself doing long term,” he says.

Five years later, Ben-Avraham was back in Colorado, with an associate’s degree in science and ready to pursue a bachelor’s in nursing. As he searched for a school, he noticed the words “Messiah College” and took notice. “The name was actually quite attractive ... quite appropriate,” he says, with a soft chuckle. Besides a suitable name, Messiah also offered an ingredient that, thus far, had been missing from Ben-Avraham’s faith experience. “I had never lived or been in a Christian community before,” he says.

During the following two years at Messiah, Ben-Avraham developed close friendships with “fellow believers who ‘walked the talk,’ which was absolutely incredible,” he says. He also discovered his ability to answer questions from students eager to learn how Judaism and Christianity are connected.

After he finishes graduate school, Ben-Avraham and his wife Katelyn (Feaver) ’08 plan to travel overseas in 2011 to work for Africa Inland Mission, a non-denominational Christian missions organization. Wherever they eventually find themselves, both are committed to building bridges, he says, not only between Jews and Christians, but also between Arabs and Israelis. “I’m a Jew and an Israeli, but my family is made of the peoples of the earth,” he says. The experience he’s gained in friendship, both with Arabs and Gentiles, he says, “is an image of how I would like to see the world.