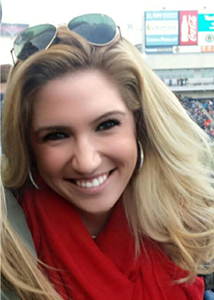 “Honestly, when I started college I had no idea what I wanted to do, but I knew I liked talking and interacting with people, so communication seemed a like a good fit. I also liked that I could use the major to go in a lot of different directions in the professional world!” said Blair Jewell (’14).

After graduating with a degree in communication, Jewell began working as the Community Relations Coordinator of the Harrisburg Senators, the Double-A affiliate of the Washington Nationals.

She explained, “There is never really a typical day, which I why I wanted to pursue a career in sports. Some days I may have hours of donation requests to review and the next I may be taking the mascot around the area delivering flowers for Valentine’s Day.”

Jewell’s responsibilities include planning events, processing donation requests, handling reading programs, managing a promotional team and mascot staff, scheduling and coordinating player and mascot appearances, and acting as the stadium promotions coordinator during games. She expressed that the most rewarding part of her job is playing a role in making people happy.

She noted, “Anyone who works in sports will probably say the same thing. It’s a lot more than a 9-5 job. During the summer, my life revolves around 71 games of baseball, which means I can’t do a lot of things! Luckily I have a lot of understanding and supportive people in my life.”

Prior to joining the Senators, Jewell interned with the Harrisburg City Islanders Pro Soccer Team for three semesters. “It was honestly one the best experiences I have ever had! I learned so much during my time there, it really paved the way for my career in sports,” she said.

She reflected on how Messiah has prepared her for her current position. “Messiah has such a mix of personalities! I really learned to interact with a wide range of people which has definitely helped with my job.”

Jewell encourages current students, “Don’t get caught in comparing yourself with others! Trust the process. Also don’t discount a full time internship post-graduation. I was an intern with the Senators from May until they hired me in November!”