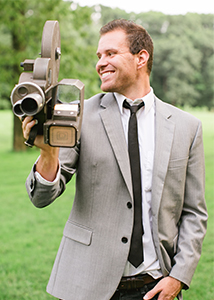 “I have always loved telling stories, and I feel that storytelling is one of the most important methods of communication we have,” says Jonathan Stutzman (’09). “It’s a way to share thoughts & ideas, explore our existence, our connection to each other, the world, and to God.” This love of storytelling led Stutzman to pursue a B.A. in communication (film concentration) at Messiah College. Currently finishing his thesis for an M.F.A. in Screenwriting & Directing for Film at Temple University, Stutzman works independently in the creative field.

He described the “kaleidoscope” of projects he has been a part of, explaining that he enjoys the creativity and freedom afforded by his job description. “My work varies from shooting films and video work for companies, musicians, and weddings, to graphic design for companies, to photography for fashion bloggers & actors, and pretty much anyone else who wants a picture,” he noted. “I also publish writing and poetry. So my typical day can range from travelling somewhere for a shoot (sometimes as far as California), to staring at a computer screen for hours editing or writing.”

Stutzman explained how Messiah has prepared him for his career. “Messiah was the place I took my original passion for filmmaking and storytelling, which had sparked in my middle school and high school years, and was able to cultivate it,” he said. “Of course it’s been a continual process of learning and growing ever since graduation, too, but Messiah definitely laid the groundwork for my craft, and how this creativity relates to my faith.”

While in college, Stutzman completed an internship with CoLaborers International, a nonprofit organization that empowers indigenous-led groups to reach their communities in Zambia and India. He also worked for the State Department, serving as a U.S. Arts Consultant to the Afghanistan National Institute of Music. He recalled, “I met a lot of wonderful talented young musicians and artists, with beautiful stories to tell. Getting to share with them and hear about their lives was such a rewarding experience. Meeting new people and experiencing different cultures, breaking that bubble of comfort, is always an important step towards learning and personal growth.”

Stutzman has also had the opportunity to teach a few film and screenwriting classes, both at Temple and Messiah, as an adjunct. “The process of teaching, having to take the knowledge you’ve learned and instilled in your own brain, and turn it into something comprehensible for someone else, creates a whole new way at looking at your craft,” he explained. “It’s an amazing, and encouraging experience to share your passions and love of something, with other people who loved it too.”

While at Messiah, Stutzman was a member of the film society, played varsity basketball, participated in student government, was an RA for two years, and spent a semester in Philadelphia. He relayed his favorite college memory. “I wanted to make a film over j-term, and because free, cool locations are hard to find for student filmmakers, I thought, hey why not use my sister-in-law’s family’s beach house in New Jersey?”

After rounding up a few film friends and actors, the crew arrived at the beach house to find they had no heat, running water, or indoor plumbing. Stutzman joked, “Contrary to popular belief, beaches are not always warm year round. So during the day we froze on the windy beach, in 30 degree weather, and at night we all huddle up in the room together trying to keep warm. I think the nearest bathroom was 5 miles away on a different isle. But it was an awesome weekend. We got to make a movie, we had a blast making it, and no one lost any toes from frost bite.”

In the short time since his graduation, Stutzman has received a number of awards. “Recently I had a great experience making a video for the Wake Up the World film competition, and was blessed when I won first place. They are flying me out to LA to meet with an NBC executive, so I’m excited about that adventure and the possibilities that might come from the experience,” he shared.

In addition, he received word that his story, “Fire Flies,” is being made into a short film for hitRECord’s TV show. He explained, “ HitRECord is a creative company/community run by Joseph Gordon-Levitt that is about utilizing the talent and creativity from people around the world to create projects together.”

A few years ago, Stutzman submitted some writing and poems to hitRECord’s book, “The Tiny Book of Tiny Stories: Volume 1.” He recalled his surprise when Joe personally picked one of his submissions. “I ended up getting three stories in Vol. 1, and then four more as well as an illustration in the next two volumes. Recently, I just found out Joe wants to make that original first story into a short film for the second season of their television show,” shared Stutzman.

In his spare time, Stutzman enjoys reading. “If I see a bookstore I’m going in, and most likely I’m coming out with a handful of paperbacks,” he shared.

He advises students, “Do as much as you can now, as far as creating work, applying for internships, and checking out job opportunities. There is no better time to start your career than now. So, get out there and do something awesome.”