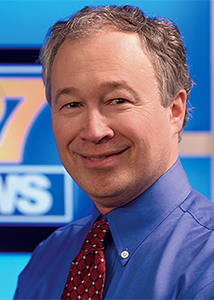 On any given day, you can find Keith Blaisdell ’82 bustling around the WHTM-TV (abc27, a local abc affiliate station) studio in Harrisburg, Pa., doing everything from finding new on-air talent, to researching and purchasing equipment, to making sure reporters’ microphones work for their live shots. Those are just a few of the many things that Blaisdell gives oversight to as the director of broadcast operations for the station.

Following 25 years a as a photojournalist, news operations manager and, eventually, news director at the station, along with a four-year break working with another company, Blaisdell now excels in one of the top leadership roles at the station.

In a nutshell, Blaisdell oversees all news, production and engineering at the station. He makes sure the news gets from story idea in the studio to live broadcast every day. With a 24-hour news cycle, Blaisdell’s work never stops, but he emphasizes the news wouldn’t happen if it weren’t for the strong, dedicated news team he works with.

“My main goal is to support a great group of professionals and give them the tools they need to do great work,” said Blaisdell. “Broadcasting is a team sport, and I am lucky to work with an excellent group of people who make it [news broadcast] happen.”

Blaisdell’s interest in television began as a child and continued through his time at Messiah. “I always knew I wanted to be in TV,” said Blaisdell. “I thought having a broader liberal arts degree would give me more flexibility than a radio/television major, so that’s why I chose Messiah. A liberal arts degree teaches you to listen, to think critically and, for me, taught me a great deal about working as a team, which is what broadcasting is all about.”

Blaisdell was part of the first graduating class of communication students at Messiah and helped spearhead a class in television production where students went out into the field and produced a 30-minute news program. In addition to his work on campus, Blaisdell secured an internship with abc27 his senior year, which helped propel him to the successful career he has today.

“Messiah instilled an idea of service in me,” reflected Blaisdell. “Today I take that with me and know that my faith matters—my faith helps me treat people fairly, helps me see my colleagues as family and most importantly helps me give people a voice who don’t always have that.”