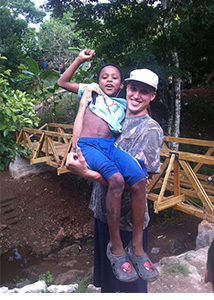 When he set off to Panama on a missions trip in August 2013, Russell Woleslagle’15 had no idea he’d return just a short year later to open a pedestrian bridge he would help build in the small village of Arraiján, Panama.

At the time, Woleslagle was exploring ways to use his gifts to serve God, and when his baseball coach invited him to go on a missions trip with AROMA, Messiah’s sports ministry group, he jumped at the chance to use his athletic skills to serve others.
What he didn’t realize though, was his engineering skills would also be a great gift to the small Panamanian community. On the AROMA trip, a local pastor shared his desire to have a bridge to connect two parts of the community together. The rainy season brings up to four feet of water in a ravine that divides the community, making it nearly impossible for children to get to school (on one side of the ravine) or to the community center where the pastor ministered (on the other side of the ravine).
Woleslagle continued thinking about the bridge when he returned to Messiah and approached the engineering department about helping with the project. Woleslagle and assistant professor of engineering Brian Swartz worked together to develop the Infrastructure Group of the Collaboratory. The group finalized plans for the pedestrian bridge in spring 2014.
Consequently during that time, Woleslagle secured an internship with Rio Missions—run by Messiah alums Dan ’99 and Jess Cotton ’99 who work with the local pastor—and made plans to spend his summer in Panama constructing the bridge.
Woleslagle never had any experience working on bridges before, but served as construction manager and led the entire project. In addition to managing workers, resources and timelines, he also spent many hours constructing the bridge himself, while also confirming his desire to pursue engineering. When the bridge opened in August 2014—exactly one year after his missions trip—Woleslagle couldn’t have been more thankful for the chance to hone his own skills, while more importantly meeting the needs of the Arraiján community.

“What I learned was more than I could have imagined. I learned how to manage a project and got hands-on experience building a structure I helped design; affirmed my desire to continue engineering; and saw God guide the opportunities to make all this possible.”