Ann Schein’s career as a performer has earned her high praise in major American and European cities and in more than fifty countries around the world. Ms. Schein has performed with leading conductors, including George Szell, James Levine, Seiji Ozawa, James dePreist, and Sir Colin Davis, and with major orchestras including the New York, Los Angeles, London philharmonics, and the BBC Symphony Orchestra. She performed at the White House during the Kennedy administration. She has had a distinguished teaching career, and was a member of the piano faculty at Peabody Conservatory from 1980-2001. Since 1984 she has been an Artist-Faculty member of the Aspen Music Festival and School. She received the Victoria and Ronald Simms Chair, awarded to a member of the Aspen piano faculty, for the summers of 2006-08 in special recognition of her teaching prominence. In 2008-09, she was a Visiting Piano Faculty member of the Indiana University Music school, and during the 2015-16 season she served as a Visiting Professor at the Eastman School of Music. In 2012, Peabody Conservatory honored her with a Distinguished Alumni Award, and she was invited to join the piano faculty at the Mannes School in 2017. She and her husband, Earl Carlyss, for 21 years second violinist of the Juilliard String Quartet, have performed countless chamber music concerts both as a Duo and in collaboration with many distinguished colleagues. 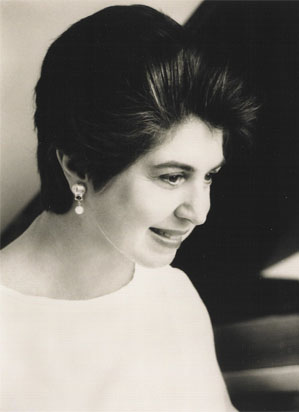