What do Humanities Fellows do? Our students are presently engaged in a number of projects, including: 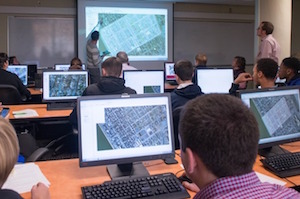 Students participate in "City Social," an effort to map the 1900 census of Harrisburg.

This public history initiative explores the practice of history in the digital age. The Digital Harrisburg website features primary research and reflections by Messiah University students, including "City Social" -- the digitization of 1900 and 1910 census records -- and "City Beautiful" -- photographs and information documenting Harrisburg's visionary project that began in the 1900s. 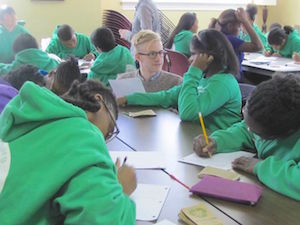 Humanities Fellow Jonathan Wolf works with students from Harrisburg public schools during a Poetry in Place event in fall 2014.

Through experiencing poetry, Harrisburg public school students and community residents will connect more significantly to the cultural, historical and ecological roots of the Harrisburg region. Poetry in Place will host workshops based on field trips to local places of significance. The program will culminate in a public poetry reading and high-quality publication of resulting poetry. 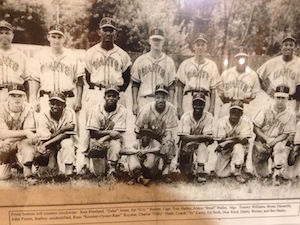 The project documents the oral histories of the surviving members of the Harrisburg Giants, an American Negro League baseball team that fully integrated in the 1950s. The film features interviews with both Giants and local historians that reveal how determination and a "love of the game" spirit led the team to win championships and to reconcile racial differences despite the segregation of the early twentieth century.