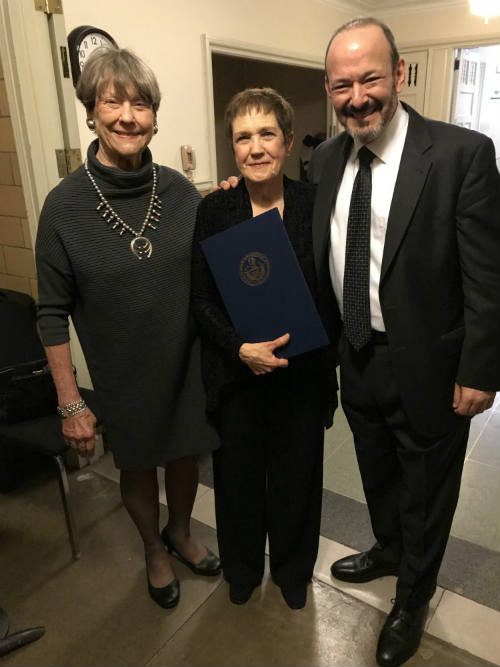 Linda L. Tedford, the artistic director, founder and conductor of the Susquehanna Chorale, was presented a citation from the Pennsylvania House of Representatives to recognize her retirement as director of choral activities at Messiah College, as well as her overall contributions to the choral art throughout her distinguished career.

Tedford will retire from Messiah in May, after 24 years of service. During that time, she conducted the Messiah Concert Choir, Chamber Singers, Men’s Ensemble, and Choral Arts Society. She also taught conducting and voice.

The citation was sponsored by The Hon. Francis X. Ryan (R), who represents Lebanon County, and was presented during a recent joint performance of the Harrisburg Symphony Orchestra, Susquehanna Chorale, and Messiah College Concert Choir and Choral Arts Society.

“Linda has received significant recognition as a leader in the choral field, and has contributed in many important ways to both the music program and Messiah as a whole,” said Richard Roberson, dean of the Messiah College School of the Arts.

In 2011, Tedford was honored by the American Choral Directors Association of Pennsylvania with the Elaine Brown Award for lifelong commitment to excellence and leadership in the choral art. In 2013, she received Theatre Harrisburg’s Award for Distinguished Service to the Arts in the Capital Region. In addition to serving as a faculty member at Messiah, Tedford founded the Susquehanna Chorale in 1981 and has served as its only conductor and artistic director. The Susquehanna Chorale is a nationally-recognized adult chamber ensemble of 35 singers, chosen by audition. The Chorale has been ensemble-in-residence at Messiah College since 2009.

Under Tedford’s leadership, the choirs have completed numerous tours throughout Europe and the United States. In addition, her choirs have produced several professional recordings, three of which have received official consideration for Grammy™ nominations.

After her retirement from Messiah, Tedford will continue to conduct and serve as artistic director of the Chorale and oversee its educational choirs for children, youth and young women. The Chorale is funded, in part, by the Cultural Enrichment Fund, the capital region’s united arts fund, and the Pennsylvania Council on the Arts.

Photo Caption: Linda L. Tedford (center) received a citation from the Pennsylvania House of Representatives honoring her retirement from Messiah College and her distinguished career in the choral art. Pictured with Tedford are Harrisburg Symphony Orchestra Music Director Stuart Malina (right) and Marion C. Alexander (left), chair of the HSO Board of Directors, during a special recent performance with the HSO.