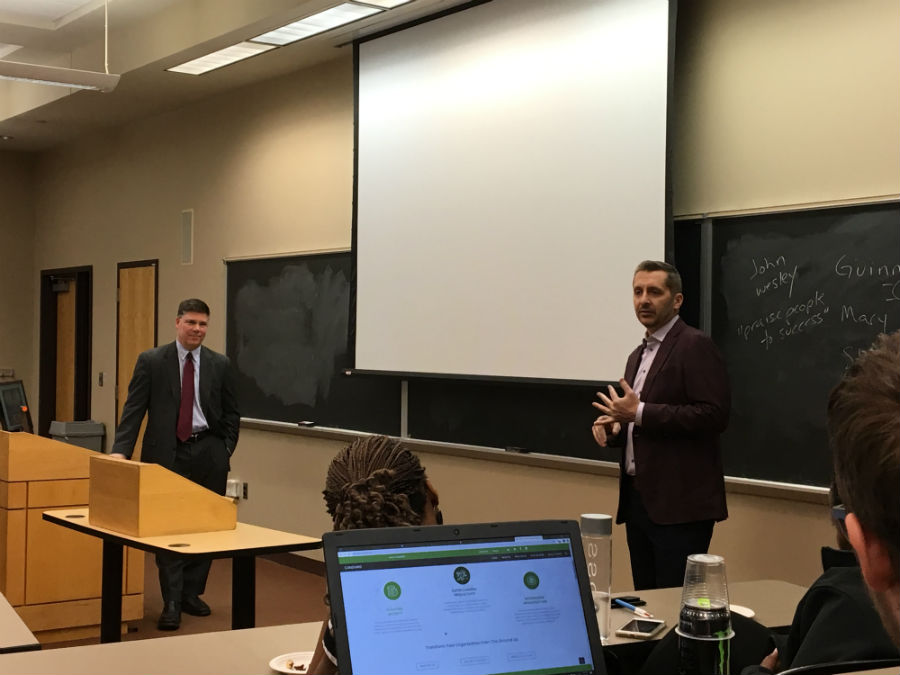 What does it look like when a follower of Jesus runs a business? That’s the question Professor Michael Zigarelli is exploring through a newly-designed course called “Business as a Ministry.” Populated by two dozen students, mostly juniors and seniors, the course analyzes the operations of 35 Christian-owned companies. According to Zigarelli, it’s the only three-credit course of its kind offered in the United States.

Also unique is that 10 executives will visit the course as guest speakers during the 12-week spring term. Among the companies represented are Martin’s Famous Pastry Shoppe, CapinCrouse, Candoris Technologies, Bingaman and Sons Lumber, Keystone Custom Homes, Suasion, and Pierson Computing.

“I’ve been delighted by how well the course is running so far,” reports Professor Zigarelli. "Since there's no model out there, we just built from scratch the kind of class that we'd want to take. The storytelling approach really seems to be resonating with our students." 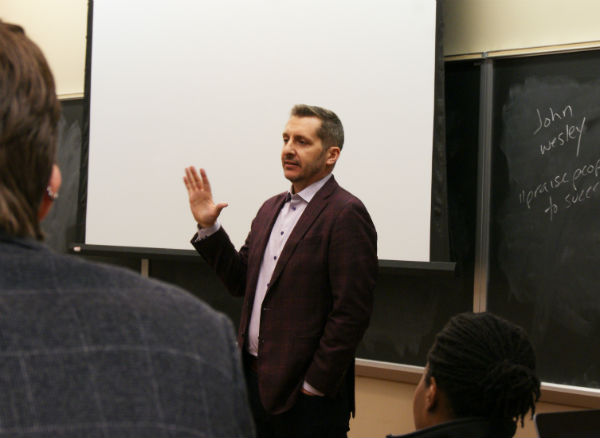 Besides learning about the myriad expressions of faith in business, at least two students have already landed interviews as a result of their interaction with the guest speakers. “Others are now coming to class with resumes in hand,” said Zigarelli.

But connecting students to business professionals is merely a byproduct benefit. Professor Zigarelli explained the deeper impetus for the course. “For more than 20 years, across four Christian universities—one Catholic, one Pentecostal, one Southern Baptist and one Brethren in Christ—I’ve asked my undergraduate and MBA students what it should look like when a follower of Jesus runs a business. That’s literally thousands of young adults and early-career professionals. Usually, says Zigarelli, his question generates blank stares or the pretext of notetaking to avoid getting cold-called. “At every university, that’s frustrated me,” he admits. “These are Christians in college business programs, after all—juniors and seniors and even graduate students! Shouldn’t they have thought through by now the connections between Sunday and Monday?”

Over time, however, Zigarelli says he came to see their confusion as simply a microcosm of the broader societal confusion about the question. “There’s a lot of misperception out there,” he says. “In one societal camp are those who have reduced ‘faith-based business’ to no wedding cake for gays, no birth control for employees, and no chicken sandwiches for anyone on Sunday. Since these are the only times the issue makes national headlines, the myopia is understandable. That portrayal, though, is only about one-percent of the reality, and often a caricature at that.”

Other camps, Zigarelli adds, are overflowing with believers who see a positive connection between Christianity and business. Social justice advocates, for example, emphasize a faith-based company’s responsibility to care for the poor and the powerless, including its employees. Evangelistic believers emphasize business as a platform for introducing people to God. Still other Christian business leaders I've known claim that their moral responsibility is simply to increase profits—legally and ethically—to enrich the stakeholders and the public coffers.

"Despite their important truths, all of these latter perspectives, like those of the first camp, are a bit reductionist. Their well-intended primacy of some faith expressions comes at the expsense of others."

Hence the confusion—from the front lines of business to the front page of the newspaper to the front row of the classroom—when questions arise about Christian-owned companies. Zigarelli says that’s ultimately why the course exists. “The intention is not for my students to converge on one right answer to the question,” he concludes. “Instead, the intention is to demystify the issue and to inspire students through stories about Christians who are honoring God and advancing the common good through their businesses. It’s a beautiful landscape and I’m glad the students are getting to see it.”