Messiah University received its charter in 1909. Founded by the Brethren in Christ Church, its orientation to Christian service is reflected in its first name—Messiah Bible School and Missionary Training Home. Originally located in Harrisburg, the school was moved to Grantham in 1911 following the construction of Old Main. This building is on land donated by the College’s first president, Samuel Rogers Smith, whose house and various business interests were in the village of Grantham. 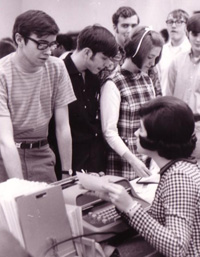 In the early years, the school offered a high school curriculum and several Bible programs. By 1921 it had also become a junior college, making it the second junior college in Pennsylvania. To reflect this development, the school’s name was changed to Messiah Bible School. By the early 1950s the school had developed four-year college programs in religious education and theology. Another change of name—to Messiah College—again intentionally reflected this academic advance of the College. During the 1950s, the College added degree programs in the liberal arts and in 1959 discontinued the secondary school program. Following accreditation in 1963, the College significantly increased the number of majors offered in the liberal arts and introduced undergraduate programs in professional studies. Messiah College now offers more than 85 academic majors.

Growth in the student body and in facilities accompanied the growth in the academic program. Contributing to the increase in numbers of students was the College’s policy, declared in its earliest official statements, of welcoming non-Brethren in Christ people as members of the student body. From a first-year total of 12 students, the student body has grown to nearly 2,800 undergraduate students, representing more than 60 denominations. Facilities have also increased from one building—Old Main—to a campus of 471 acres, offering students a breadth of well equipped, high-quality academic, cocurricular, and residential facilities.

Other significant developments have occurred within the last 30 years. In 1965, Upland College, a Brethren in Christ school in California, merged with Messiah College. Three years later, Messiah College opened its Philadelphia Campus in collaboration with Temple University, the first cooperative arrangement in the United States between a church-related college and a nonsectarian university. In 1983, the College became the senior educational partner with Daystar Institute (now Daystar University) in Nairobi, Kenya. Messiah College played a leading role in the founding of the Christian College Consortium in 1971, and later, the Council for Christian Colleges and Universities. In 1972 the legal ties between the College and the Brethren in Christ Church were replaced with a covenant relationship in which legal ownership of the College was placed with a self-perpetuating Board of Trustees.

Two presidents held notably lengthy terms of office. C.N. Hostetter Jr. (president from 1934 to 1960) directed the College through the difficult years of the Depression, and guided its academic life into becoming a four-year liberal arts college. D. Ray Hostetter presided for thirty years (1964–1994) over an expansion that occurred on virtually every level of Messiah College’s life. 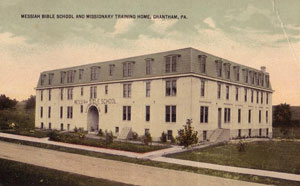 Under the leadership of its seventh president, Rodney J. Sawatsky, the College furthered its commitment to academic excellence and community engagement and rearticulated its mission and identity statement as follows:

Messiah College is a Christian college of the liberal and applied arts and sciences. The College is committed to an embracing evangelical spirit rooted in the Anabaptist, Pietist, and Wesleyan traditions of the Christian church. Our mission is to educate men and women toward maturity of intellect, character, and Christian faith in preparation for lives of service, leadership, and reconciliation in Church and society.

In December 2004, the College celebrated the appointment of its eighth president, Kim S. Phipps. With the changes and developments of the past 100 years, various elements in the history of Messiah College have remained constant—an emphasis on education for service, acceptance of students and faculty from a diversity of backgrounds, a commitment to excellence, and an endeavor to make Christ preeminent.

Information on Our history