Messiah University will be in session this spring with flexible in-person and remote learning options, health and safety protocols and student care and support. Visit our COVID-19 response website.

This section will include the answers to the most often asked questions about the museum. If you have a question for our staff, please e-mail us at OakesMuseum@messiah.edu.

The Oakes Museum of Natural History is a 10,000-square-foot museum of natural history located in Mechanicsburg, Pennsylvania on the first two floors of Messiah College's Jordan Science Center.

The Oakes Museum of Natural History houses a collection of Smithsonian-quality African and North American mammals, bird eggs, fish, seashells, minerals, insects and fossils. An anchor of the museum is the collection of African mammals, the largest of its kind in Pennsylvania, which features over 75 full mounts, including an elephant, hippopotamus, zebra, giraffe and forest nyala.

The North American mammal collection has more than 100 specimens including a Kodiak Island bear, great elk, American bison and a musk ox. Full mounts of mountain sheep, goats and mountain lions are also on exhibit.

The museum's collection includes more than 200 bird nests and 17,000 bird eggs, which is one of the largest private bird egg collections in the United States. It contains rare and valuable specimens, including irreplaceable South American tinamou eggs and passenger pigeon eggs. The cataloged collection of birds includes 300 full-mounted specimens.

The museum also features six dioramas created by renowned artists Jerry Connolly and John Schreffler. Jerry Connolly is a career wildlife artist who has painted more than 130 diorama backgrounds and wildlife scenes in more than 30 museums nationwide, including the Smithsonian Museums of Natural History and Technology, the William Penn Museum, and the Carnegie Museum. John Schreffler is a commercial artist who studied scientific preparation of animals under Watson Perrygo, the chief preparator of natural science at the Smithsonian Institute. He has worked for the Pennsylvania state museum as an artist and preparator for more than 30 years, completing 25 full-size dioramas.

The Oakes Museum of Natural History is named for generous support of Galen and Beulah Oakes of Massillon, Ohio. Galen Oakes is a 1948 graduate of Messiah College and a long-time member of Messiah's board of trustees, and his wife is a 1949 graduate of Messiah.

The museum is open to the public on Saturdays - 1:00 to 5:00 p.m., except on major holidays and during college closures.  School and other tour groups are scheduled year round by appointment. Register here.

All of our mammal specimens came from private collections donated to the museum for use in our educational mission. The bird eggs and nests were primarily collected in the late 19th and early 20th centuries when such collecting was both legal and popular. They stand as irreplaceable evidence to many bird species that can no longer be disturbed.

The Oakes Museum of Natural History creates exhibits, programs, and research to inspire wonder, discovery and love of the natural world.

With more than 180 mammals on display and over 60,000 specimens in our scientific collections, the Oakes Museum of Natural History, we has the ability to customize the experience for each group that visits. We bring the specimens to life through docent interaction, exceptional dioramas, and connect visits with the natural ecosystems around campus.

The Oakes Museum of Natural History provides an exceptional learning environment for Messiah College students in a wide variety of disciplines, including the sciences, the arts, history, business and education. We also serve faculty who have special course needs and provide students with unique internship and volunteer opportunities at the museum.  The museum also serves as a unique venue for campus meetings and events. 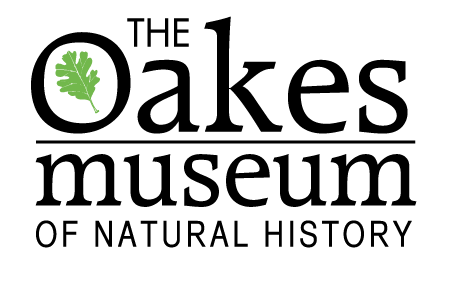