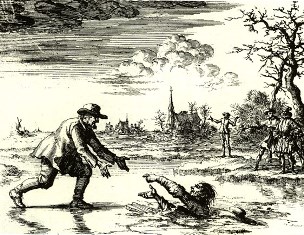 In this famous image from Anabaptist history, Anabaptist Dirk Willems rescues his former captor from drowning in a frozen lake. Willems was subsequently recaptured and burned at the stake as a heretic. (Courtesy of Lancaster Mennonite Historical Society)

Anabaptism is a Christian theological tradition sometimes known as the radical wing of the Protestant Reformation.

Developed during the 16th-century Protestant Reformation, Anabaptism contended that other Protestant movements (such as Lutheranism or Calvinism) were right in demanding reform of the Roman Catholic Church. However, these radicals complained that, in some respects, the Protestant reformers had not gone far enough with their demands. The Anabaptists encouraged their fellow Christians to embrace further reforms, such as:

The term "Anabaptist" literally means "re-baptizer." Their opponents gave them this name when they began administering adult baptism to one another, believing that their baptism as infants was not an authentic form of baptism. The Anabaptists contended that baptism should follow the commitment one makes to follow Jesus, and thus rejected infant baptism. While many twenty-first century Christian groups now practice adult baptism (sometimes called "believer's baptism"), practicing this form of baptism in the sixteenth century was dangerous, and it often brought persecution to the Anabaptists.

In the sixteenth century, every citizen in a given geographical area was automatically a member of the church. The Anabaptists had a different conception of the church, believing that church membership should consist only of those who made a voluntary, adult decision to follow Jesus. The church, said the Anabaptists, should be a voluntary, visible gathering of believers who committed themselves to encourage and discipline one another—a far cry from seeing the church as comprised of everyone who resided in a given geographical area.

Separation of Church and State

In a society racked by violence and selfishness, Anabaptists called for placing the way of Jesus above self- and group-interest. The Anabaptists interpreted Jesus' command to love one's enemies (Matthew 5:43–45) as a real command, and they embraced his teaching that, because his kingdom was "not of this world," his disciples would not fight their enemies with the weapons of this world (John 18:36). The Anabaptists concluded that, to truly follow Jesus, they needed to reject the sword as a way of responding to their enemies.

Because of their new ideas, the Anabaptists often found themselves persecuted by other Christians, both Protestant and Catholic. Indeed, thousands of Anabaptist suffered martyrdom during the sixteenth and seventeenth centuries. They survived this persecution, however, and added to their numbers, and some eventually migrated to North America. The most numerous Anabaptist immigrants were "Mennonites," who took their name from an early Dutch Anabaptist leader named Menno Simons. The Amish and the Hutterites were two other Anabaptist groups that migrated to North America.