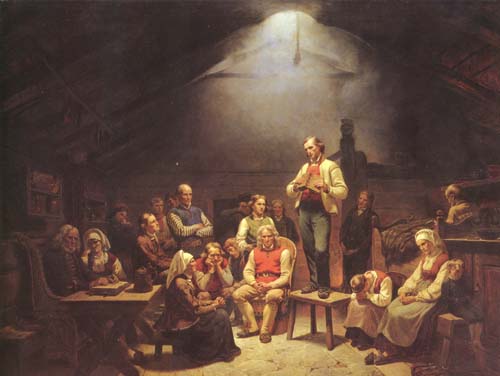 Pietists of the seventeenth century were different from other Christians because of their devotional life: they gathered regularly to pray, read the Bible, and share testimonies -- as depicted in this nineteenth-century painting. (WikiMedia Commons)

Pietism is a Christian theological tradition emphasizing the need for a heart-felt faith.

Pietism traces its roots to late 17th-century Germany. In the century following the Protestant Reformation, some Christians grew disenchanted with the ongoing theological disputes that splintered the Christian church into competing factions.

In response to these disputes, and in hopes of kindling a more spiritually-minded Christianity in a time of intellectuallized ("scholastic") faith, the Pietist movement was born.

The key treatise of this emerging movement was written in 1675 by Philipp Jakob Spener. Entitled Pia Desideria (or "Pious Desires"), Spener's treatise called on Christians to live out the implications of Luther's reformation faith. In that sense, Spener and his fellow Pietists did not develop a theology of their own, but rather advocated a living faith they felt was absent in most Protestant churches.

Among other things, the Pietists emphasized:

In many ways, the Pietists' concerns mirrored those of sixteenth-century Anabaptism, which likewise claimed the Protestant Reformation had not reformed the church as thoroughly as it needed to be reformed. On the other hand, Pietism was malleable enough to be combined with other theological traditions besides Anabaptism. Jakob Spener was himself a Lutheran minister, and he believed his emphases meshed well with Lutheran theology. The English Puritans combined Pietist emphases with their Calvinist theology, and another Englishman, John Wesley, incorporated Pietist emphases into the eighteenth-century Methodist movement (see Wesleyanism).

The Brethren in Christ Church, Messiah College's founding denomination, has its roots in the Pietist tradition. The denomination's founders were Lancaster County Mennonites who, around 1775, responded enthusiastically to itinerant preachers who were preaching a Pietist message. In that way, the beginnings of the Brethren in Christ Church can be seen as a marriage of Anabaptism and Pietism.