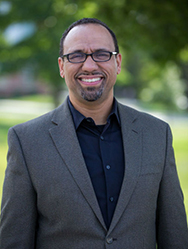 Powery joined the Messiah faculty as Professor of Biblical Studies in 2008. His research, writing, and editing relates to the New Testament, including Jesus Reads Scripture (Brill, 2003) and True to Our Native Land: An African American NT Commentary (Fortress/Augsburg, 2007). His most recent (co-authored) publication, The Genesis of Liberation: Biblical Interpretation in the Antebellum Narratives of the Enslaved (WJKP, 2016), engages the function of the Bible in the 19th-century ‘slave narrative’ tradition, including the narratives of Frederick Douglass and Harriet Jacobs.

Presently, he co-chairs the “Slavery, Resistance, and Freedom” section of SBL.

When not dissecting some peculiar Greek phrase, wrestling with a cultural hermeneutical perspective, or listening to Bob Marley’s tunes, Emerson enjoys attending Mets games, with Kimberly and their four sons, in D.C. or Philadelphia.