Who said you can’t follow your dreams and be successful? 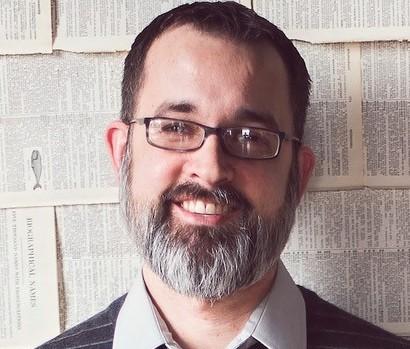 Shawn Smucker ’99 is evidence that you can have passion and success. While practicality is the name of the game for many college students, surrendering to his passion is what has brought Smucker joy—and a living. Smucker attended Messiah University from 1995 to 1999, graduating with a bachelor’s degree in English. While he didn’t find his place immediately upon graduation, Smucker eventually moved in a direction that allowed him to be creative. “That was 12 years ago, and I haven’t looked back,” he said.

Smucker’s draw to Messiah began his senior year of high school, through a relationship he had with his soccer coach and mentor, Jason Spodnick. Spodnick was a recent Messiah graduate at the time, which encouraged Smucker to visit the university himself. It was during his visit that he fell in love with the school. His love for books, however, was long-standing and deep-rooted. “I loved books for as long as I can remember, hiding under the covers with a flashlight at night when I was a kid so that I could keep reading The Hardy Boys or The Chronicles of Narnia,” Smucker said. As a result, when he saw that English was a major at Messiah, he jumped at the opportunity.

Smucker credits Messiah’s English program for his reading abilities, saying “The English program turned me into a lifelong learner of good writing, and it continues to shape the work I do.”  Smucker also said that the students and professors he met along the way contributed to where he is now and who he has become as a writer. He described the time he spent with the people in the department as engaging and stimulating.

Smucker recalls how he attempted to jump into the business world because he didn’t believe he could make a living through his creativity. The summer after he graduated, he and his new wife, Maile Silva, went from Florida to England and then Virginia before landing back in Lancaster County in 2009. Lancaster is where he currently pursues his dream of writing. Today, Smucker makes his living through collaborations with others in order to create their own memoirs. He has written more than thirty books for others and, in addition, has published six of his own—three of which have received Christianity Today’s annual book award for fiction. Another special project he is a part of is the podcast he and his wife created for writers titled, “The Stories Between Us.”

Smucker encourages students to wholeheartedly pursue their dreams. “Don’t force yourself to be too practical in your choice of vocation, and surrender to the direction life is taking you,” he added. For him, it wasn’t until he acknowledged this, that he was able to make his passion his full-time job.

Fun Fact: Shawn Smucker’s oldest son is considering Messiah University. If he selects Messiah, he would begin his college journey exactly 25 years after Smucker and his wife began dating.

Learn more about the English program at Messiah University.