Opera Production:  Yeoman of the Guard

At the Tower of London, Colonel Fairfax is sentenced to death for the crime of sorcery, and is awaiting his execution this very day, when Sergeant Meryll appears in hopes to provide him a reprieve.  Meryll is loyal to Fairfax because he served with him in battle and Fairfax twice saved his life.  When the prisoner appears, he reveals that his wicked cousin will inherit his estate if he dies unmarried.  Fairfax laments that if he could only marry a woman – any woman, it matters not whom – he would pay that woman a healthy sum for her troubles, when suddenly the jester Jack Point and his lovely assistant, Elsie Maynard appear to perform for the gathering street crowd.  After Elsie reveals that her mother is ill and needs money for medicines, Elsie agrees to be blindfolded and marry Fairfax, much to the chagrin of Point who is secretly in love with Elsie.  Meanwhile, Sergeant Meryll has hatched a plan to have Fairfax disguised as his son Leonard so that he may disappear and escape, which he does and the entire Tower is thrown into chaos (and Jack Point laments even further at the thought of Elsie’s hasty groom being free for more than an hour).  Eventually, after several plot twists involving other members of the Tower, Fairfax (still disguised as “Leonard”) manages to woo Elsie when all find out that “Fairfax” has been shot trying to escape (a lie the head jailor agrees to with Jack Point).  However, when it is revealed that Fairfax is really “Leonard”, the real Leonard arrives announcing the reprieve for the real Fairfax.  Elsie, now arriving for her marriage to “Leonard”, hears that her real husband (Fairfax) is still alive and free.  Elsie’s initial despair grows into delight as it is finally revealed that her husband (Fairfax) is indeed “Leonard” whom she loves madly.  Other marriages are announced, and the entire Tower of London rejoices, except the broken-hearted Jack Point. 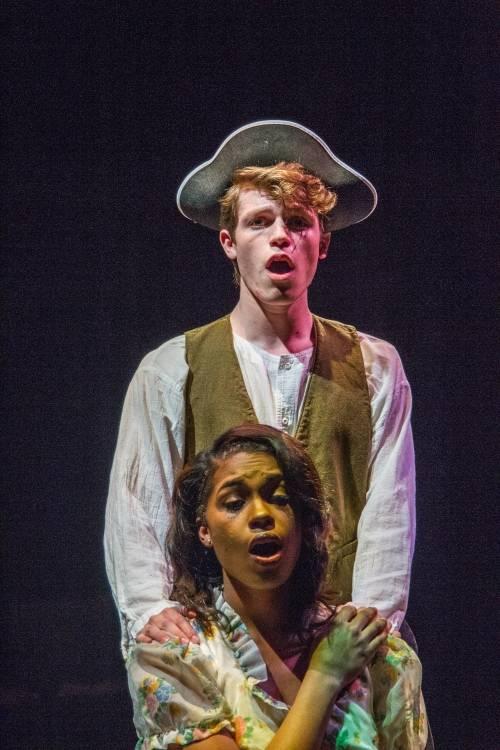