When disaster strikes, where is God?

Messiah College Board of Trustees member Rich Godshall and his family were visiting the tiny Micronesian island of Yap in 2004 when a typhoon came barreling through.

Godshall tucked his two daughters and wife into the hotel room bathroom for hours while he held a mattress against the door.

“You weren’t sure if these were the final hours, but the wind, you could hear it shearing the roof off the hotel. You could feel the building heaving,” he said. “You heard that wind and that typhoon just ripping at that hotel—like it wanted to get in—and was just peeling the layers off. And I was thinking, ‘How many more layers are there to go before this room’s just gonna open up?’”

The Godshalls were on Yap visiting their oldest daughter, Tana, who was there with the Peace Corps. As they huddled together that night, they relied on their faith for comfort and support.

“A number of times we prayed together as a family for our safety,” Godshall said. “The Lord is with us, and he will guide us where he wants us to go.”

Understanding that God is with you is easy to do under sunny skies. But when disaster strikes or a personal crisis erupts, even the most steadfast among us can falter in our faith. At Messiah College, students, faculty, staff and trustees like Godshall are empowered by the simple call to live out the truth of the gospel. And that urge to serve and love others no matter the circumstance is what ultimately shines the light of Christ in life’s darkest moments.

Practicing what we preach

“Who Jesus was and what he taught, it was always about loving marginalized groups in times of need, in times of disaster. And that requires us to be uncomfortable,” said Ashley Sheaffer, director of the Agapé Center for Service and Learning. Sheaffer says an important part of Messiah’s curriculum, from its annual Service Day to its Experiential Learning Initiative graduation requirement, is aimed at instilling something within its students they might not yet know they’ll need.

“I think the larger piece that we as an institution are trying to teach is the idea of resilience, that in times of disaster we want our students to be brave, courageous and resilient, to seek the gospel in living. That’s the rootedness that we want for our students,” she said. “And if they are really rooting themselves in the gospel, we hope that will enable their spirits to be bold and brave and courageous.”

Getting students out of their comfort zones in the name of service is a large piece of that faith building block. Christian ministries major Kris Sledge ’13 stepped out of his comfort zone while on a mission trip to Uganda after his freshman year. It nearly cost him his life, yet deepened his faith.

In 2010, Sledge convinced a few of his friends to stay an extra week abroad to immerse themselves in the culture of the East African country they’d been serving. On the evening of July 11, 2010, he and his friends went to a crowded outdoor café to watch a World Cup soccer game. Toward the end of the game’s first half, they noticed a man walking back and forth in front of the screen. He seemed agitated. Sledge’s friend invited the man to take an empty seat at their table.

“Little did we know that we had invited a terrorist to sit with us that evening,” he said.

The man was wearing a suicide vest of explosives. Minutes later, the vest detonated, killing the bomber and 75 others, including three of Sledge’s Ugandan friends. Sledge suffered a severely broken leg, an orbital fracture and a temporary loss of hearing.

It took 10 surgeries, six months of rehab and extensive therapy for the young pastor to recover physically, mentally and emotionally. But Sledge says in the chaos of that horrific crime, one simple expression of faith at the bombing site rose above the din and rooted him to the truth he still believed to be true.

“Two of my team members were there, and I remember one of them looked at me and said ‘Kris, sing us a song.’ I remember telling her, ‘Pam, I can’t.’ And then her 14-year-old son began to sing ‘Jesus Loves Me This I Know.’ So we were sitting there singing ‘Jesus loves me this I know, for the Bible tells me so,’” he recalls. “In that moment, it gave us peace, because we didn’t know what was going on. It took 12 hours before I really knew what had happened.”

In the months afterward, as Sledge grappled with survivor guilt and Post-Traumatic Stress Disorder, he was led to a Bible verse that helped him make sense of where God is in such times of inexplicable suffering.

“Romans 8:31: ‘What, then, shall we say in response to these things? If God is for us, who can be against us?’ It gave me hope, but also a lens to look at other incidents that happen in the world today,” said Sledge, who credits the support of his peers and professors at Messiah for his ability to recover as quickly as he did. “There is evil in this world; from the beauty of free will, there’s pain and difficulty. And I was a part of that that night.”

Accepting that God can be with those suffering yet not prevent the circumstances of suffering might seem like a difficult leap of faith to make, yet those who’ve experienced such moments of fear and stress see it clearly in the way humanity immediately comes together. It’s what called Godshall, who is semi-retired, to stay on the island for two weeks after the storm, helping FEMA volunteers, Yap villagers and his daughter clean up from the devastation.

“During that time you saw people of all types come together and work in unity and peace and calm,” he said. “You’re able to glean out of (a disaster) the positives of what life really means.”

Sledge, now a pastor at State Line Methodist Church in State Line, Pennsylvania, says he now understands, perhaps better than most, that safety in this life is not guaranteed. Yet his Messiah experience left him convicted that Christ is with us and acts through us for the good of people everywhere.

From a kitchen fire in a residence hall to an active shooter on campus, many scenarios could pose a danger to Messiah’s students and staff. And Vice President of Operations Kathie Shafer has imagined them all.

“I could lose sleep if I thought about all the things you could catastrophize about,” said Shafer, who heads up Messiah’s crisis management committee. “So I have to figure out what’s most likely.”

The committee, comprised of staff from several departments, makes sure students are cared for, communication is clear and safety protocols are followed when disaster strikes.

The team holds mock drills and practice sessions through the year. They mobilize for a weather-related incident, a student injury or anything that takes the College out of its normal business flow.

“We work together to give the immediate response to minimize danger to students and damage to our properties,” said Shafer. “And then the team looks at what we have to do to get our campus back to normal.”

Shafer is the first one called when something happens that warrants the crisis team’s involvement.

“I feel the weight of caring for the campus,” she said, “but, on the other hand, I’m blessed with a response team that equally feels that way and people who work really well together. If it weren’t for the faith that all of us have, it would be a lot harder. Inherently, at some point, someone at the table will say, ‘Can we just take a minute and pray?’ And that’s a different person every time. Without our faith, we’re not going to be able to do this.”

“The book encourages children, parents, friends and colleagues to engage in more acts of civil-mindedness,” he explained.

As a child in Haiti, Toussaint grew up immersed in service to others. Then as a Messiah student working at the Agapé Center, he deepened that commitment.

In Grantham, he met two influential people: Community Engagement Liaison Chad Frey (then-director of the Agapé Center) and Kirstin Snow, an adjunct professor at the time, both featured on the book’s cover.

“They opened doors for me,” said Toussaint. “This book is the product of [Messiah’s] community.”

When an earthquake hit Haiti in 2010, Toussaint tried to go home, but flights were limited to medical staff and media. So, Snow, a former chief of staff for then-Governor of Pennsylvania Ed Rendell, called her former boss on behalf of her former student. Rendell expedited a press pass for Toussaint, who then flew home to take photos in a professional capacity. The trip sparked the idea for the book—and Rendell wrote the foreword. 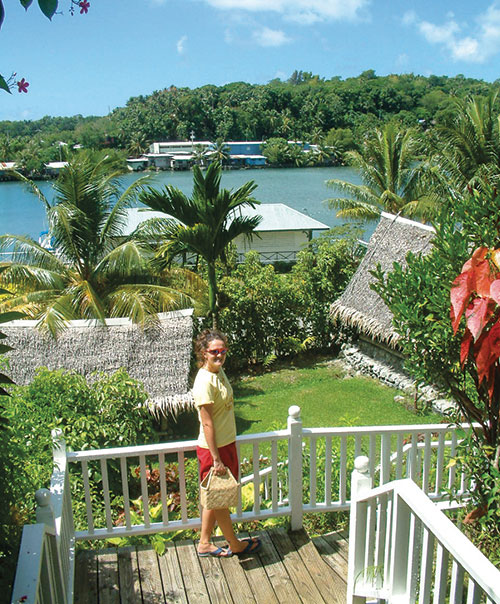 Trustee Rich Godshall was visiting his daughter Tana (pictured) on the tiny Micronesian island of Yap, where she was serving in the Peace Corps. 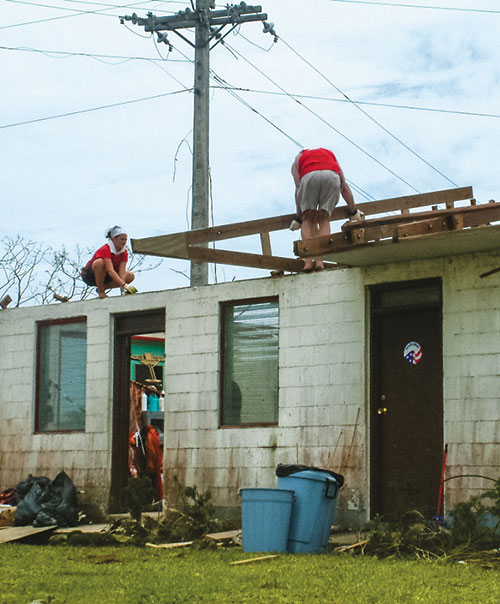 After the island was hit by a typhoon, Godshall and his family stayed behind to help with the relief efforts. 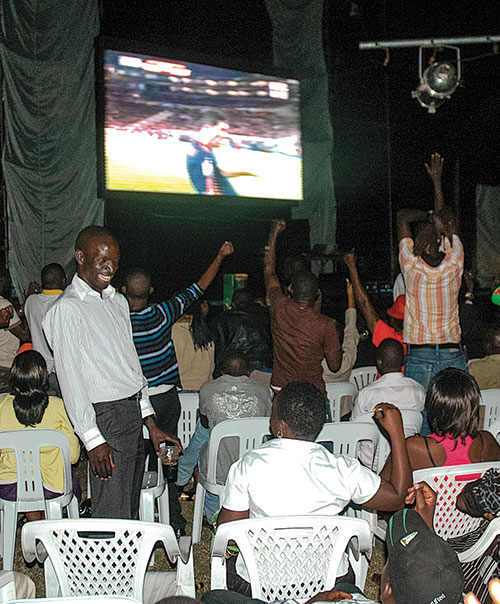 Kris Sledge '13 and his friends were watching a soccer game at an outdoor cafe in Uganda when a man detonated a vest bomb. 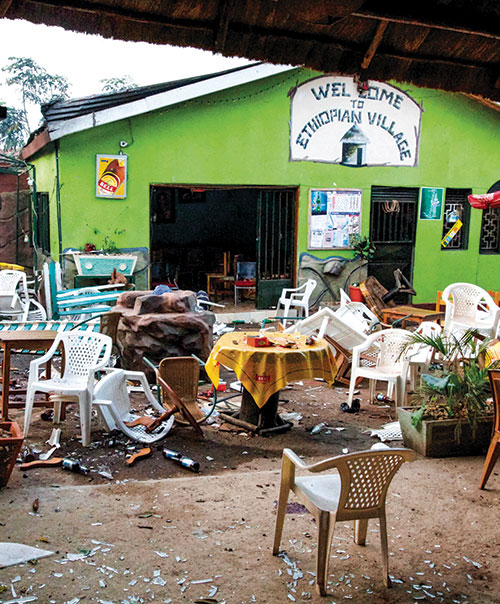 The devastation of the bomb killed 76 people, three of whom were friends of Sledge. 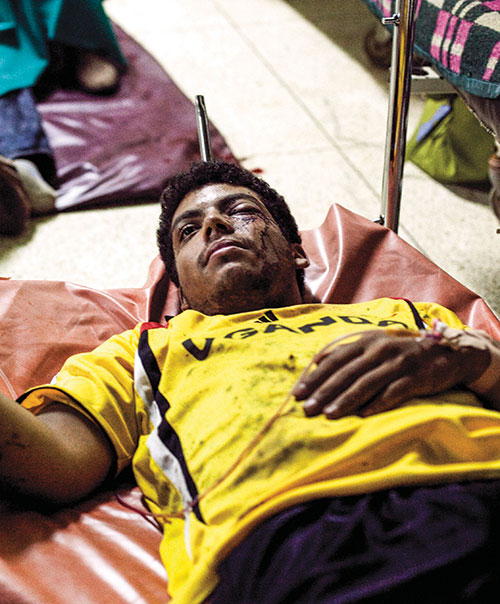 Sledge suffered multiple injuries as a result of the bombing.
View the full issue