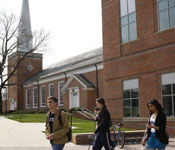 About the turn of the 20th century, Wesleyan holiness theology, with its accent on the sanctified life, influenced Brethren in Christ thinking and eventually became an official doctrine of the church. This Wesleyan strand of theology emphasized the power of the Holy Spirit to enable believers to live a sanctified life of obedience and holiness. Thus over the years the Brethren in Christ have been nurtured by the three theological streams of Anabaptism, Pietism and Wesleyanism.

These traditions, blending in the Brethren in Christ understanding of the Christian faith converge on a number of points:

But, each of these three traditions also brings its own individual emphases. For example, Anabaptism adds a commitment to peace, reconciliation and radical discipleship; Pietism stresses warm-hearted religious experience and small group Bible study; and Wesleyanism holds an Arminian view of God and a special understanding of sanctification and the life of holiness. In the 20th century the Brethren in Christ have emphasized mission endeavors as well as social justice and service ministries. An embracing ecumenical stance has enabled them to participate with a variety of other denominations and national religious organizations. They are a member of the Mennonite Central Committee and cooperate closely with Mennonites around the world in peace witness as well as relief and service activities.

To learn more about Anabaptism, Pietism, Wesleyanism and the Brethren in Christ Church, visit The Sider Institute site.