Department of Theater and Dance

Have you ever dreamed of being on stage? Now is your chance! The Department of Theatre and Dance will be presenting three productions this fall — The Glass Menagerie by Tennessee Williams, Much Ado About Nothing by William Shakespeare, and Shoeless Joe: A Musical Cabaret — and you're invited to be a part of them.

Glass Menagerie and Much Ado About Nothing
General Auditions for Glass Menagerie and Much Ado About Nothing will be held on Wednesday, August 25, 6pm - 9pm in Poorman Black Box Theater, located in Climenhaga Building. Callbacks will be held on Thursday, August 26, 5pm - 9pm. An audition sign-up sheet and character descriptions will be posted starting August 20 on the callboard in the Theatre Hallway of lower-level Climenhaga.

AUDITION REQUIREMENTS
Those planning to audition should prepare the following.

AUDITION REQUIREMENTS
Those planning to audition should prepare the following. 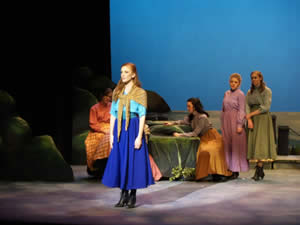 Casting is open to all members of the academic community. Occasionally, guest actors will be employed. Any Messiah University student enrolled and in good academic standing as defined by the statement on satisfactory academic process in the student handbook is encourage to audition.

Theatre majors who have declared the acting emphasis are required to audition for all department productions. Specific details about semester auditions are posted in the Climenhaga Building Theatre Hallway on the call board.

From her cramped St. Louis apartment, Amanda Wingfield dreams of her days as a Southern debutante while worrying about the future of her aimless son Tom and unmarried daughter Laura. With their father absent and the Great Depression in motion, the siblings find comfort in their foibles— alcohol, movies and writing for Tom and a collection of glass animals for Laura—which only heightens Amanda’s anxiety. When a gentleman caller arrives for dinner, the Wingfields are flooded with hope. But it’s unclear if his presence will change things for the better or shatter their fragile illusions.

Much Ado About Nothing is one of Shakespeare’s wittiest romantic comedies. The story contrasts two pairs of lovers in a clever and suspenseful “battle of the sexes” in an imaginative comedy about the chaos created in the pursuit of love. The bantering lovers, Benedick and Beatrice, are deadlocked in a lively war of words while their friends try to trick the bickering pair into admitting they’re in love. Their young sidekicks, Hero and Claudio, start a romance of their own that is threatened by a dastardly plot to separate them. Near-fatal complications ensue, but with the help of the hilarious Constable Dogberry and his bumbling police force, the lovers are ultimately united.

Shoeless Joe: A Musical Cabaret
Directed by Susan Hurley
Oct. 29-30 at 8:00 p.m.
A new cabaret every time! Uniquely built for each new cast.

Department of Theatre and Dance