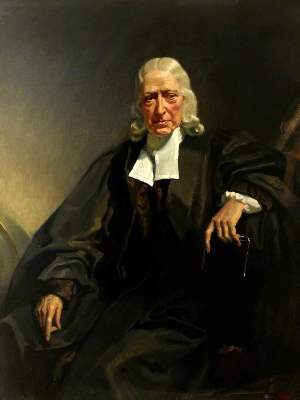 John Wesley, founder of Methodism, believed strongly in the importance of Christian holiness -- both on a personal and a social level. (WikiMedia Commons)

Wesleyanism is a Christian theological tradition calling believers to holiness in personal and social life.

The Wesleyan theological tradition traces its roots to the work of John Wesley, the founder of Methodism. Wesley, who was born in England in 1703, trained to become an Anglican minister. In the course of that training, he and a few of his close associates (including his brother Charles) formed a small group that met for Bible study, prayer, and careful spiritual examination. Due to their methodical approach to developing holy lives, the "Holy Club" participants gained the label "Methodists," a label that eventually stuck to the fast-growing ecclesiastical movement that Wesley founded and led.

After a missionary journey to America (1735–1737) and a powerful conversion experience (1738), Wesley became convinced that his work and that of his fellow Methodists must be empowered by the Holy Spirit. While he did not renounce the disciplined activities of the Holy Club, he realized that their effectiveness was ultimately dependent upon the power of God's Spirit. Much of Wesley's writing revolved around his conviction that the Holy Spirit could accomplish great things in the lives of believers.

In many ways, Wesley's theology was similar to other Protestant reformers, reflecting a strong emphasis on justification by faith. But while Wesley's writings on "justification" mirrored that of other Protestants, he developed a distinct understanding of "sanctification." According to Wesley, salvation is completed by a return to original righteousness, a return made possible by the power of the Holy Spirit. In other words, sanctification is more than the gradual spiritual growth that follows justification by faith. It is the deliverance from sin. In the Wesleyan tradition, this work of the Holy Spirit in this regard is often called "entire sanctification."

For many persons in the Wesleyan tradition (also called "the Holiness tradition"), the event of one's entire sanctification can be traced to a particular moment when an individual experiences a "second, definite work of grace." Others have not been so willing to identify sanctification with a certain place and time. Still, the emphasis on Spirit-empowered holy living is a hallmark of the Wesleyan/Holiness tradition. According to Wesleyan/Holiness writers, the "holy life" is characterized most fully by a pure love for God and neighbor, by following all of God's commands, and by doing everything for the glory of God.

Not surprisingly, the Wesleyan/Holiness tradition has been at the forefront of many social reform movements, endeavoring to bring healing to societies racked by social sin. Moreover, due to its strong emphasis on the work of the Holy Spirit—a work that clearly transcends gender—churches in the Wesleyan/Holiness tradition have often been more willing to ordain women to the ministry than have other Christian churches.

Many North American denominations find their roots in the Wesleyan tradition, including the Wesleyan Church, the Church of God (Anderson, Indiana), and the Church of the Nazarene. The Brethren in Christ Church, Messiah College's founding denomination, first encountered the Holiness movement in the late 19th century, and before long adopted John Wesley's formulation of entire sanctification. While the Brethren in Christ Church no longer refers to "entire sanctification" in its official documents, it continues to place a strong emphasis on holy living and, like many other churches in the Wesleyan/Holiness tradition, it ordains women to pastoral ministry.