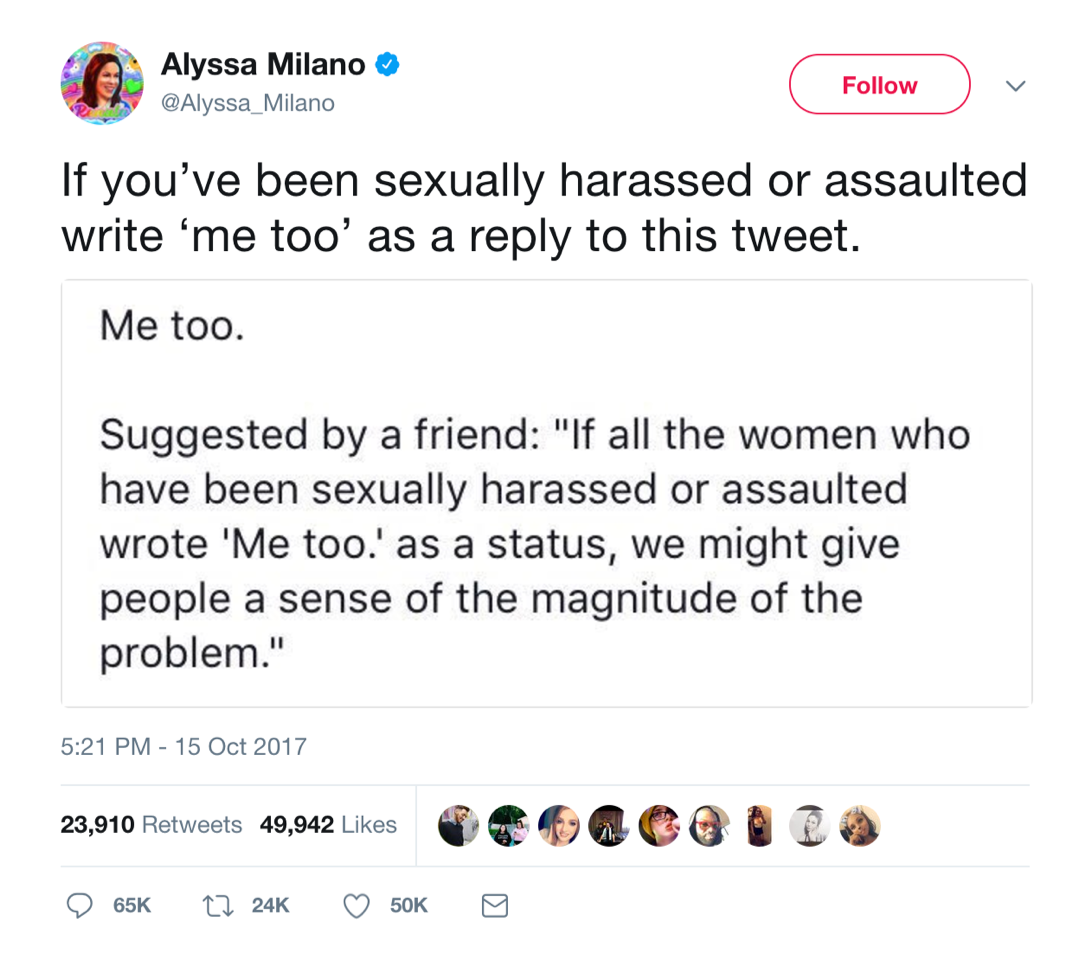 #MeToo. Two words representing a typically sensitive subject have sparked a movement, resulting in a trending tag on Twitter. The hashtag created a place for victims of sexual assault to find solace and support from others who have experienced similar struggles caused by sexual trauma.

Although the first instance of the #MeToo movement was over 10 years ago, actress Alyssa Milano brought attention to the subject again on October 15th. With a tweet encouraging Twitter users to reply with the words "me too," Milano has received more than 68,000 tweets in response.

#MeToo is not the first example of social activism on social media sites. Twitter, along with Facebook and Instagram, has become a platform for users to speak out about and give support to social issues. Newsfeeds were taken over by the Ice Bucket Challenge, which raised awareness for amyotrophic lateral sclerosis. #TakeAKnee as caused controversy between professional athletes making a statement about racial injustice and the President fighting the display of defiance.

These are just a few of the many hot topics that have grown popularity by using hashtags. The official term for this type of communication is hashtag activism. Hashtag activism is “the act of fighting for or supporting a cause with the use of hashtags as primary channel to raise awareness of an issue and encourage debate via social media,” according to researchers from the Public Relations Review.

Public relations officials can use the hashtag activism trend to their advantage. By sparking interest and garnering attention through a popular hashtag, a post may reach further audiences and have a bigger impact on behavior. Grassroots organizations have put this tactic to use, which can be seen with the #blacklivesmatter and #bringourgirlsback tags. If the hashtag is used by an influential person, the benefits can drastically increase. Michelle Obama was photographed with the #bringourgirlsback hashtag during a presidential address. Her mention brought the issue to an international audience when before the story may have gotten little to no coverage.

Some believe that the hashtag can only do so much. With a variety of political and social issues vying for shares and likes on newsfeeds, people can feel bombarded with information. What’s more, it is easy for a user to simply click the like button and move on to the next post. No action results from the newfound information, but rather just an acknowledgement. David Carr of the New York Times put it simply, “Another week, another hashtag, and with it, a question about what is actually being accomplished.”

Whether useful to the cause or not, hashtags will remain a dominant way of starting a conversation about tricky topics. This week, #MeToo is the subject of interest. What will capture newsfeeds next?