Disagreements can easily become fights, and many of us have been taught that fighting is "bad"  so we are subtly encouraged not to disagree. But resolving our differences openly and effectively often brings us closer to the people we care about. 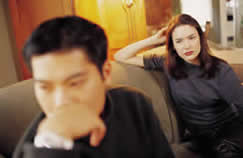 Here are some suggestions for an effective, healthy “fight.”

Avoid any sentences (actually they are accusations) beginning with “You always…” or “You never…” These types of statements are rarely true in the strictest sense, and only serve to make the recipient defensive.  The most common responses to such statements are, “I do not!” or “Oh yeah, well you always/never…” Either way, this exchange will most likely escalate hostilities and lead to an argument where each person tries to convince the other that the other’s original statement is false, because there are exceptions.

Likewise, if you are on the receiving end of a “You always/never…” statement, try to resist the urge to respond with “Well you…” Again this will lead to the scenario above.
Don’t clam up, pout, give the silent treatment, agree just to end the conflict or say, “Nothing’s wrong, I’m fine.”

Many times women, and sometimes men, are given the message from their family that their anger is inappropriate.  When anger is felt, a natural outcome of disagreement, these individuals say nothing rather than express angry feelings.  These behaviors put an end to open conflict for the time being, so in the short-term they serve a purpose.  However, they do not allow for resolution of the disagreement.

A relationship exists between two individuals.  In other words, if you and I have a conflict, it exists solely between you and me, not you, your roommate and me, or you, my family and me.  This pattern of relationships is called triangulation, i.e. involving third parties.  You may wish to share your feelings with others who are close to you for support and to clarify your thoughts, but don’t drag them into the conflict, asking them to take sides.  Most of us have been guilty of talking with everyone under the sun and moon about a problem, except to the one person with whom we have the conflict.

Don’t blame him/her for how you are feeling

Try to avoid saying “You make me angry when…” It’s nobody’s fault how you feel.  Instead, try putting your statements into this formula:  “When you do x, I feel y, and what I want is z.”  For example:  “When you criticize my choices, I feel ridiculed, like a little kid, and what I would prefer is that you respect my right to run my life even when you don’t agree with me.”  Keep in mind the purpose of this type of statement.  Your objective is to communicate clearly how the other person’s behavior affects you and to suggest a different course of action.  That’s all.  It is not to force them to change or to get them to feel guilty.  It is simply to inform them of your feelings in regard to their actions.  With this as your goal, it is hard to fail.  Now that you have communicated your feelings, the other person has received feedback about their behavior and has the option to change.  You cannot control how others act.  Resign yourself to this.

Many people do not see the value in making statements such as the ones above.  They mistakenly believe that others know how they feel.  At times, others may be able to read your body language, but this is a notoriously inaccurate method of communication.  You are much more likely to be clearly understood if you state your feelings openly.

You may have experienced a disagreement that started out on one subject then quickly expanded to include all past transgressions, where you or someone else has thrown in everything but the kitchen sink.  Stick to the subject at hand.  Better yet, don’t let frustrations build up until you are fighting about things that happened months ago.

Avoid statements such as “You’re so lazy, irresponsible, inconsiderate, ________”  Be specific about behavior and give examples.  This avoids confusion and arguments about labels and their meanings.

This pattern can get started innocently enough.  We often choose to ignore minor irritations, since we know that living in close contact with someone else requires some compromise and flexibility.  But when we are not able to stop thinking about those little compromises and truly let them go, they need to be dealt with openly.

Be curious, not furious

Many discussions get out of hand before they truly begin because one or both of the people involved start with the mindset that they are absolutely clear about all of the details, motivations and feelings involved in the situation.  Approach a serious talk with the objective of finding out more about the situation that is bothering you.  Ask if what you believe has happened is so. What is the other person’s perception of the situation?  What motivated him/her to act the way they did? When you believe there is nothing the other person can tell you that will alter your perception, it is harder to listen objectively and you set yourself up to remain angry.  Listen first, and then decide.

Ask for suggestions for a solution

After you have discussed the situation, ask him/her what they feel can be done to resolve the problem.  Make suggestions of your own.  Look for a mutually satisfactory result.

Respect his/her right to have a different opinion

You will never agree on absolutely everything.  If you are willing to accept that and not try to win him/her over to your way of thinking, you will go a long way towards establishing mutual respect as a foundation of your friendship.

Are you struggling with a relationship concern? The counselors at the Engle Center are here to help you! Our services are free and confidential and setting up an appointment is easy to do.

A friend loves at all times, and a brother is born for adversity.
Proverbs 17:17